The Politics of the Past in the Black Freedom Struggle 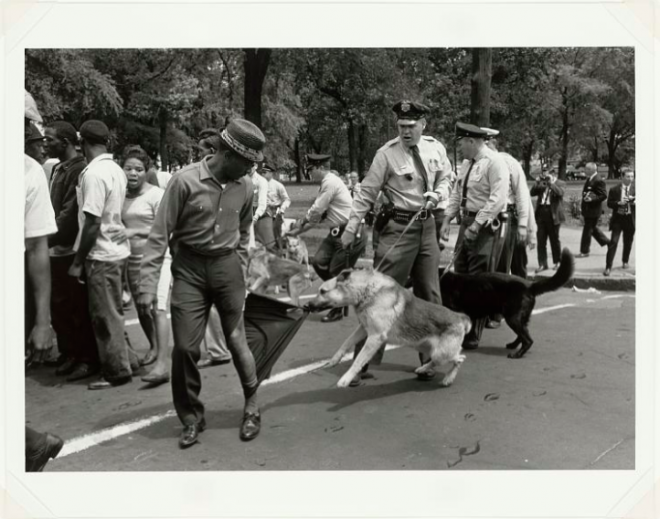 “I grew up reading about you,” historian Clayborne Carson told Terrence Roberts, one of the nine Arkansas teenagers who faced down racist mobs to integrate Little Rock Central High School in 1957. The two sat beside each other onstage before a packed audience at the National Museum of the American Indian, there to witness the opening roundtable for “The Future of the African American Past”—a historic conference inaugurating the Smithsonian Institution’s National Museum of African American History and Culture, soon to open on the National Mall. Carson’s remark presaged themes that moderator Barbara Ransby and panelists Rosalyn Terborg-Penn, Sara M. Evans, and Jessica Pierce would take up—especially the way movement activists think about the past as they become politicized.

The roundtable title—“The Long Struggle for Civil Rights and Black Freedom”—gestured to historians’ efforts over the past four decades to interpret African American activism in the 20th century. Carson’s first book, In Struggle: SNCC and the Black Awakening of the 1960s (1981), distinguished these two aspects of the movement. Responding to Ransby’s first question to the panel (“What was your entry into the movement, as a scholar or activist?”), Carson said it all began on the spot where the audience sat: the National Mall, site of the 1963 March on Washington for Jobs and Freedom. “It was my first demonstration—I thought they would all be like that,” he joked. But he also described meeting Stokely Carmichael, then a Howard University student, already a veteran of the Freedom Rides, and soon to become the leader of the Student Nonviolent Coordinating Committee (SNCC). “He made a distinction between the Civil Rights Movement—which would culminate with the March on Washington, the Voting Rights Act, and the Civil Rights Act—and what I call the Freedom Struggle,” Carson explained. “When I met Stokely Carmichael and Bob Moses,” Carson added, “I realized something deeper: Martin Luther King was following them. That’s what I tried to join—the Freedom Struggle.”

Historians’ interpretations of African American activism have grown increasingly nuanced, unfolding a narrative of more breadth and depth than textbook versions that begin and end with giants like Martin Luther King Jr. The “Long Civil Rights Movement,” as historians came to call it, had gone on for generations. It involved multiple strategies and ideologies, including influences from Africa and the Caribbean, going back to the First World War and even earlier. Debates about violence and self-defense had a long history, too. The movement varied tremendously at the grassroots level and had to come to terms with differences in activists’ class and regional backgrounds. And women had always played a central role in the fight.

All of these insights surfaced in the discussion, and it was clear that the panelists’ activism drew in part on feelings arising from a sense of history. “I considered myself conscripted on December 3, 1941, as I came charging out of the womb,” said Roberts. As a student at Queens College (CUNY), Terborg-Penn joined “a little stale group called the NAACP. There were not many black students there, but I recruited all of them. My father was a student at NYU in the 1920s but never talked about the racism he faced there. But he was friends with Dorothy Height—and she was a troublemaker.” “My linkage to the movement goes way back,” said Evans. “As a white southerner, I grew up with segregation. My mother told me that they [other white southerners] would say that slavery wasn’t the cause of the Civil War, but they were wrong.”

Pierce provided perspective on the struggle as a leader in the Black Lives Matter movement (which Ransby, who’s writing a book on the subject, was quick to point out consists of dozens of national organizations, in addition to local groups). Activists like Pierce approach questions of power, racism, and inequality intentionally through an intersectional analysis—as she explained, when she comes to any conversation, she insists on recognition as black, queer, and female simultaneously. Activists like Pierce have for years been fostering “spaces” where intersectionality can generate analysis and strategy. In some respects, it’s working, as even presidential candidates reckon with the ways the drug war, mass incarceration, and police violence have wreaked havoc on black communities.

The negative connotations of the politics of respectability are ascendant among contemporary activists. Pierce pointed out that Rosa Parks had a forebear in Claudette Colvin, who refused to give up her seat in a Jim Crow bus before Parks did. Colvin’s story is less well known because she didn’t draw the legal support of groups like the NAACP—her respectability was less firmly established in the community, unlike the indomitable but feminine NAACP activist Parks. Respectability silenced Colvin. “We have to dismantle” respectability, Pierce said. “The most respectable people have done the most damage to the movement—respectability is just another tool to separate people.” Terborg-Penn responded, “Respectability has many meanings. My girl Mary Church Terrell was on the picket line all the time. Whether you’re talking about the 1950s, the 1920s, or today, it’s a debatable thing. It can be a way of putting you down if you rock the boat.”

The NMAAHC will undoubtedly reflect these debates, though precisely how remains to be seen. As with all history museums, the perceptions that visitors bring into the building will shape their experience in it. When young people coming into consciousness in the age of Black Lives Matter visit with school groups or on family vacations, they will likely desire historical narratives that make sense of who they are becoming, how the world is changing around them, and, of course, how they can change the world. If the opening roundtable was any indication, there’s an appetite and a need for this museum, at this time. “There’s something dangerous in telling the truth,” Pierce said, yet in the end narratives have the ability to transform, to empower.

Allison Miller is editor of Perspectives on History, the newsmagazine of the American Historical Association. She tweets @Cliopticon.