“The Long Struggle for Civil Rights and Black Freedom”: The Past, the Present, and the Future 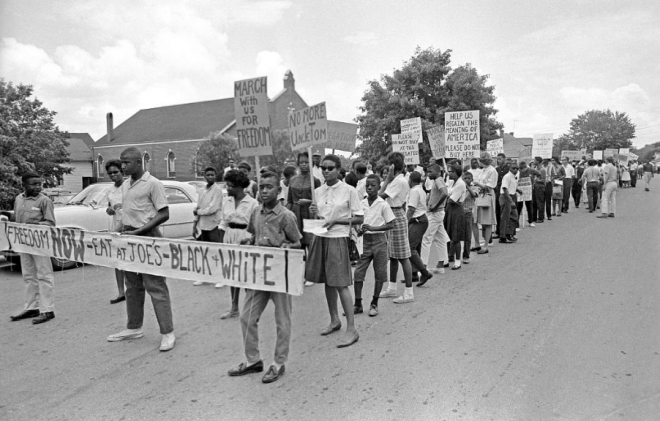 The great scholar and public intellectual John Hope Franklin, who did as much as anyone to create the academic field now known as African American history, died in March, 2009, at the age of 94. He lived just long enough to witness the election and inauguration of Barack Obama as the nation’s first African American president, but sadly not long enough to see the construction of the long-awaited National Museum of African American History and Culture (NMAAHC). Even so, I couldn’t help but feel that his spirit was in the room last night when several prominent historians and perhaps 200 others gathered for the first session of a three-day conference on “The Future of the African American Past.” Jointly sponsored by the NMAAHC and the American Historical Association, with support from HistoryTM and the National Endowment for the Humanities, the conference opened with a roundtable/panel discussion on “The Long Struggle for Civil Rights and Black Freedom.”

Since the NMAAHC building is still under construction and not quite ready for occupancy—the official opening will take place on September 24 with President Obama cutting the ceremonial ribbon—last night’s session was held in a theater at the National Museum of the American Indian. NMAAHC director Lonnie Bunch welcomed the audience and promised three days “ripe with robust debate.” Acknowledging the “vibrancy” and “expansive nature” of African American history, however, Bunch noted that no single conference could possibly deal with it all. Perhaps so, but if the opening session is any indication of what is to come, the conference, and the new museum, will be models of open and wide-ranging inquiry.

Moderated by Barbara Ransby, noted biographer of legendary organizer and civil rights sage Ella Baker, the discussion that followed offered a tantalizing series of personal reflections and pearls of wisdom. The initial question from Ransby, “What was your entry into the movement . . . what were the circumstances under which you entered into the work related to the Black freedom movement either as a scholar or as an activist?” elicited a fascinating array of responses. Clayborne Carson, a historian from Stanford University known for his work on the Student Nonviolent Coordinating Committee (SNCC) and the papers of the Reverend Martin Luther King Jr., opened the conversation with a memory of attending the March on Washington in August, 1963, at the age of 19. Carson emphasized the important distinction between “the civil rights movement” and the broader “freedom struggle,” and recalled learning from discussions with Stokely Carmichael and SNCC activist Bob Moses that “there were people in the movement who were not seeking civil rights legislation,” people who wanted change and empowerment at a deeper level.

Sara Evans (Univ. of Minnesota), author of Personal Politics: The Roots of Women’s Liberation in the Civil Rights Movement & the New Left (1976), a groundbreaking study of the connections between civil rights activism and feminism, traced her activism and scholarship back to her student days at Duke in the mid-1960s. She insisted, however, that her linkage went back even further because she was “a white Southerner,” specifically the daughter of a North Carolina minister who lost his job after delivering a sermon challenging the discriminatory white primary system.

Rosalyn Terborg-Penn, professor emerita at Morgan State University in Baltimore, also spoke about her college experiences, in her case at Queens College in New York in the early 1960s. As part of a student chapter of the NAACP, she picketed a Woolworths lunch counter in solidarity with the famous February, 1960, Greensboro, North Carolina, sit-in campaign. “White America was not ready,” she recalled, even in the North, where a nascent and often overlooked movement was emerging. One member of that movement, Andrew Goodman, who would lose his life in Mississippi in 1964 as a Freedom Summer volunteer, was a freshman at Queens when Terborg-Penn was a senior.

Terborg-Penn was followed by Terrence Roberts, a clinical psychologist and one of the Little Rock Nine students who braved white supremacist mobs obstructing the desegregation of Central High School in 1957 in Little Rock, Arkansas. Roberts took the audience back to his birth in 1941, the year he claimed he was “conscripted into the civil rights army.” He recalled expressing curiosity about “Negro history” as a young boy only to be discouraged by elders in the local black community who counseled, “Don’t bring that up, don’t cause trouble.” The warning obviously didn’t take; nearly 60 years after the Little Rock crisis, he insisted, “I still consider myself an activist soldier in the ongoing movement.”

The youngest of the panelists, Jessica Pierce, an activist with the Black Youth Project 100, an organization mobilized in response to the 2012 killing of Trayvon Martin in Sanford, Florida, talked passionately about her early experiences as the only black student attending a San Francisco Bay Area high school. Initially drawn to a legal career, she was warned away by a professor who advised: “You don’t want to be a lawyer—you care about justice.” Heeding this advice, she became a labor organizer and turned her attention to the allied issues of economic justice and racial and gender equality. Later in the program, she reminded the audience that Black people needed places to heal and places to organize.

Following these initial reflections, Barbara Ransby turned to the panelists and asked them for one word that captured “an important theme in the African American freedom struggle.” The choices made by the panelists, who had been informed of the question in advance, were both telling and fascinating: “blackness” (Terborg-Penn); “progress” (Pierce); “grassroots” (Evans); “struggle” (Carson); and “enigma” (Roberts). The ensuing explanations led to a dialogue that reached across the entire spectrum of movement issues, both past and present. Carson, discussing his chosen world “struggle,” posed a question related to identity politics and coalition building: “If we are going to change the world, who are we are going to change it with?” On a related note, he recalled Bob Moses’s response upon hearing the title of Dr. King’s 1967 book Where Do We Go from Here: Chaos or Community?; “The problem is,” Moses reportedly asked, “who are we?”

In a similar vein, Roberts claimed that “the true knowledge of who we are, is missing,” hence his attraction to the word enigma. Recalling an incident when he was asked whether he preferred to be called “black or African American,” Roberts shot back, “I want more options.” Questioning the notion of profound change over the past half century, he recalled Malcolm X’s famous fable: one cannot stick a knife in a man’s back, pull it out six inches, and then claim progress. (Someone in the audience pointed out that the conference had opened fittingly on May 19, Malcolm X’s birthday.)

Evans also spoke about both “the deep long history of racism” and the fact that she had “witnessed a revolution,” albeit an incomplete one. Reconsidering her choice, she offered “mobilize” as an alternative, but still insisted that changes at the grassroots were the key to the struggle, that a new day beckoned when “the people at the bottom began to believe that change was possible.” The civil rights movement’s legislative victories, she reminded the audience, represented “only the beginning of the beginning.” Other panelists chimed in with equally stimulating and thought-provoking comments and questions—Ransby: “What about economic justice?”, “Black is a political color”; Terborg-Penn: “How’re we going to translate the ‘movement’ of the past and the movement of now”; Carson: “The closer you are to the inside of a movement, the more you realize that as you’re creating a movement, someone else is creating a mythology of the movement.”

The question of mythmaking came up several times again during discussions with the audience, and the panelists readily acknowledged the artificiality of any historical narrative. Carson related such questions to the NMAAHC’s challenge of presenting a compelling and accurate version of the movement’s history and the broader African American story. “How do you decide what belongs in it?” he asked, in a roundabout response to a Twitter question from a Vanderbilt student: “How important are historians to the Freedom Struggle?” After conceding the truism “all historians create myths,” Carson declared “I am going to be really interested in all the mythological things that go into that museum.” Evans followed with the maxim that “Our job is to keep on complicating the story, reminding me of the whimsical definition of an intellectual as someone who turns answers into questions.” On the same wavelength, Terborg-Penn ended the evening urging historians of African American history to “look for the untold story.”

At the beginning of the evening, Lonnie Bunch had predicted that the NMAAHC “will recenter the history of the African American experience.” But if last night’s fascinating opening session is a harbinger of things to come, the “geometry” of historical memory and interpretation will be far more complicated. The vitality of the field—so much in evidence last night—will in all likelihood take us in multiple directions, some centrifugal and others centripetal, as the museum’s unparalleled collection and interpretive reach stimulate new debates and create new intellectual worlds to conquer. John Hope, I know you wouldn't accept anything less.

Raymond Arsenault is the John Hope Franklin Professor of Southern History and Chair of the Department of History and Politics at the University of South Florida, St. Petersburg.