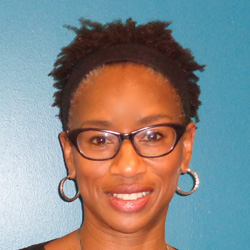 Stephanie Smallwood teaches at the University of Washington where she is appointed as Associate Professor of History and affiliated Associate Professor of American Ethnic Studies. Her research and teaching focus on early modern histories of slavery, colonialism, and race, with particular emphasis on precolonial Africa, the transatlantic slave trade, and African diasporas in the Americas. She is the author of Saltwater Slavery: A Middle Passage from Africa to American Diaspora (Harvard, 2007), winner of the 2008 Frederick Douglass Prize awarded by Yale University’s Gilder Lehrman Institute for the Study of Slavery, Resistance and Abolition. Her current project, Africa in the Atlantic World: A Geopolitical History is concerned with the problematics of space in the intercontinental arena that scholars have come to call the “Atlantic world.”  The project investigates the uneven spatial relations that shaped the Atlantic as a geopolitical domain and aims to produce a counter-narrative of Atlantic history that puts the peoples of the African continent at its center.