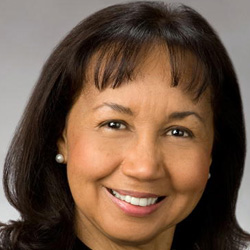 Rita Roberts, the Nathaniel Wright Stephenson Chair in History and Biography at Scripps College, teaches and researches topics in nineteenth century U.S. history with special focus on the African American experience. Her articles and book, Evangelicalism and the Politics of Reform in Northern Black Thought, 1776-1863 reflect her interest in understanding free black activism and antebellum free blacks’ sense of place in the United States. Currently, she is completing a manuscript that examines letters of enslaved and free(d) people in the Civil War era, especially during the years of Reconstruction. Future projects include a full biography of nationalist, scientist, and intellectual Martin Delany and a biography of a Melungeon family tentatively titled, “Identity, Nationality, and Race: A Biography of a Nineteenth Century American Family.” Dr. Roberts teaches courses in African American history from the 16th to the 21st centuries, including “African Diaspora in the United States,” “Slave Women in Antebellum America,” “Black Intellectuals and the Politics of Race,” as well as more general United States history courses such as the first half of the United States survey, “The Old South in Myth and Reality,” and “Women, Religion, and Politics in the Antebellum Era.”