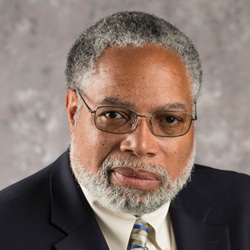 Lonnie G. Bunch, III is the founding director of the Smithsonian’s National Museum of African American History and Culture. Prior to his appointment, Bunch served as the president of the Chicago Historical Society (2001-2005) and held several positions at the Smithsonian, including Associate Director for Curatorial Affairs (1994-2000) and supervising curator (1989-1992) at the National Museum of American History (NMAH).

Bunch has written on topics ranging from slavery to diversity in museum management and the impact of funding and politics on American museums. In 2010, he published the award-winning book Call the Lost Dream Back: Essays on Race, History and Museums. His most recent book, Memories of the Enslaved: Voices from the Slave Narratives, was published in 2015. Since 2008, Bunch has served as the series co-editor of the “New Public Scholarship Edition” of the University of Michigan Press.