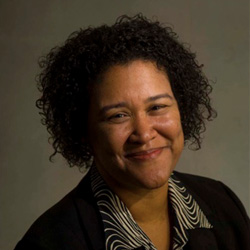 Leslie M. Harris is Associate Professor of History and African American Studies at Emory University. She received her undergraduate degree from Columbia University and her doctoral degree from Stanford University. At Emory, she has chaired the Department of African American Studies and was named Winship Distinguished Research Professor in the Humanities. Harris is the author or co-editor of three award-winning books: In the Shadow of Slavery: African Americans in New York City, 1626-1863 (University of Chicago, 2003); co-editor with Ira Berlin of Slavery in New York (The New Press, 2005), which accompanied the groundbreaking New-York Historical Society exhibition of the same name; and Slavery and Freedom in Savannah (University of Georgia Press, 2014), co-edited with Daina Ramey Berry, in collaboration with Telfair Museums' Owens-Thomas House. From 2004 to 2011, she co-founded and co-directed the Transforming Community Project (TCP) at Emory University, which used history to engage the university community in dialogues on racial and other forms of human diversity. The Transforming Community Project received generous funding from the Ford Foundation and the Emory University Strategic Plan Fund. Harris is currently working on a book on late-twentieth century New Orleans; and co-edited volumes on slavery and the university; and slavery and sexuality.