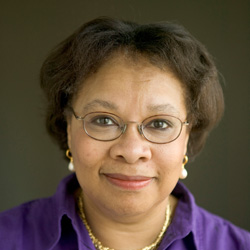 Gretchen Sullivan Sorin holds a BA degree from Rutgers University in American Studies, an MA in Museum Studies from the Cooperstown Graduate Program, and a PhD from Albany University in history.  Dr. Sorin has more than thirty years of experience as a museum consultant working for more than 250 museums. She has served as an exhibition guest curator for many exhibitions including the nationally acclaimed traveling exhibition, Bridges and Boundaries: African Americans and American Jews for the Jewish Museum in New York and Wilderness Cure: Tuberculosis and the Adirondacks for the Adirondack Museum. Dr. Sorin writes and lectures frequently on African American history and museum practice.  Her books include Touring Historic Harlem, Four Walks in Northern Manhattan with architectural historian Andrew Dolkart, In the Spirit of Martin:  The Living Legacy of Dr. Martin Luther King, Jr., Through the Eyes of Others: African Americans and Identity in American Art and Case Studies in Cultural Entrepreneurship: How to Create Relevant and Sustainable Institutions.  She is currently working with Ric Burns and Steeplechase Films on a documentary film on African Americans and the automobile and travel during the era of Jim Crow.

*Since the NEH was founded, the agency has awarded more than $171 million to nearly three thousand projects on African American history and culture. Sorin has been a recipient of NEH funding.