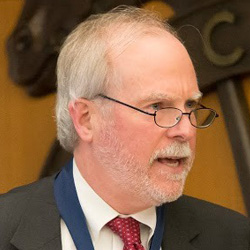 Eric Arnesen, the James R. Hoffa Professor of History and the Vice Dean for Faculty and Administration in the Columbian College of Arts and Sciences at The George Washington University, is the author of Brotherhoods of Color: Black Railroad Workers and the Struggle for Equality (2001), which received the 2001 Wesley-Logan Prize in Diaspora History from the AHA and ASAALH, and Waterfront Workers of New Orleans: Race, Class, and Politics, 1863-1923 (1991), which won the AHA’s John H. Dunning Prize. He is also the author of Black Protest and the Great Migration: A Brief History with Documents, and editor or co-editor of four other books. His scholarly articles have appeared in the American Historical Review, Labor: Studies in Working-Class History of the Americas, American Communist History, Labor History, and the International Review of Social History; he was a regular contributor to the Chicago Tribune and his reviews and essays have appeared in the New Republic, the Boston Globe, Historically Speaking, the Washington Post, and Dissent. In 2006, he held the Distinguished Fulbright Chair at Uppsala University in Sweden and since 2013 has served as co-chair of the Washington History Seminar. He is currently completing a biography of A. Philip Randolph.

*Since the NEH was founded, the agency has awarded more than $171 million to nearly three thousand projects on African American history and culture. Arnesen has been a recipient of NEH funding.