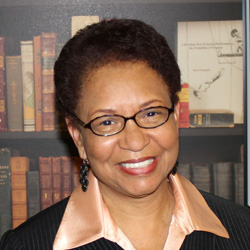 Edna Greene Medford is Chairperson and Professor of History at Howard University, where she specializes in 19th century United States history, with an emphasis on slavery, the Civil War and Reconstruction. Dr. Medford's publications include: Lincoln and Emancipation (2015), The Emancipation Proclamation: Three Views (co-authored with Harold Holzer and Frank Williams, 2006), and she is the editor of Historical Perspectives of the African Burial Ground: New York Blacks and the Diaspora, volume 3 of The New York African Burial Ground: Unearthing the African Presence in Colonial New York (2009).

*Since the NEH was founded, the agency has awarded more than $171 million to nearly three thousand projects on African American history and culture. Medford has been a recipient of NEH funding.