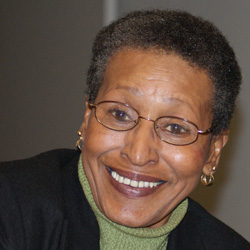 Dorothy Spruill Redford was reared in Queens, NY and attended Queens College. In 1986, she orchestrated an unprecedented gathering of descendants at Somerset Place State Historic Site, the former North Carolina antebellum plantation on which generations of her ancestors were enslaved. Redford ended a career in Social Services in 1988 to accept a position at Somerset Place where she served as the Site Manager for eighteen years. Under her direction, Somerset Place now includes structural representations of the plantation’s history of enslavement and a factually inclusive interpretive program that engages scholars and the general public in a dialogue about the lives of more than 800 enslaved individuals who undergirded the plantation’s existence. Ms. Redford has served on the boards of Monticello, Fort Monroe, and the North Carolina Freedom Monument Project. She is a recipient of the John Tyler Caldwell Award for the Humanities, the Congressional Black Associates Carter G. Woodson Award, and an honorary Litt. D. from East Carolina University. She is the author of Somerset Homecoming: Recovering a Lost Heritage; Generations of Somerset Place: From Slavery to Freedom; and The Life and Legacy of Josephine Napoleon Leary 1856-1923.