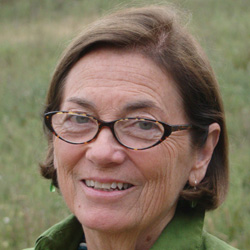 Dolores Hayden, professor of architecture, urbanism, and American studies at Yale, writes about built environments and the politics of place. She is the author of many works on the contested history of American landscapes including The Power of Place: Urban Landscapes as Public History (MIT Press, 1995) and Building Suburbia: Green Fields and Urban Growth (Pantheon, 2003). In Los Angeles in the 1980s, she founded The Power of Place, a non-profit that developed a downtown itinerary of livelihoods in the city to promote historic preservation and public art on sites important to the history of women and people of color. She directed the Biddy Mason project on an African American midwife as part of this campaign in the 1990s. Over the course of her career, Hayden has taught at MIT, UCLA, and UC Berkeley, and been a Guggenheim fellow, a fellow at the Radcliffe Institute, and a fellow at the Center for Advanced Study in the Behavioral Sciences at Stanford. In 2010 she served as president of the Urban History Association. Her current project, Exuberance, includes a tribute to the career of pioneering African American aviator Bessie Coleman.

*Since the NEH was founded, the agency has awarded more than $171 million to nearly three thousand projects on African American history and culture. Hayden has been a recipient of NEH funding.